‘To make the most of these new technologies, we must be focused on the long-term.’

Whether it’s electric cars, in-orbit robotics, the manufacturing industry, or even the surprising announcement that Madame Tussauds is stepping into the world of animatronics, robotics and artificial intelligence (AI) are at the heart of many of the latest technological developments around us.

But what challenges and opportunities does this present for nuclear fusion, and indeed for Culham Science Centre? Richard Woodall from UKAEA’s communications team spoke to RACE Director Rob Buckingham to find out more.

“We are probably at the top of the AI hype curve right now. It’s important to remain focused on the long-term uses of these powerful technologies – there are plenty for fusion remote maintenance and beyond.”

It’s obvious Rob is passionate about the work of RACE (Remote Applications in Challenging Environments). But amidst all the positive energy on display, mix robots with a nuclear environment and it won’t take too long for a challenge to present itself. A philosophical approach in this line of work certainly seems to help solve the numerous quandaries.

Having initially started his career at Culham, Rob Buckingham set up Bristol-based company OC Robotics. As co-founder, he pioneered the use of snake-arm robots in hazardous and confined spaces working in the nuclear sector, aerospace, construction and petrochemicals. He returned to RACE in September 2014 to lead Culham’s work on fusion remote handling, and to build collaborations with industry in fields such as fission and driverless cars.

Although both robotics and AI will undoubtedly change the nature of some jobs, Rob says it’s important to differentiate between the two. “AI is about new techniques to analyse data to enable better decision making” he says. “Robotics is about the machines that move tools, goods or people. Clearly there are lots of ways in which AI techniques will be used to improve the performance of the robotics, including making them more autonomous, cheaper and more productive. We need all of that if a fusion power plant is to create a commercially viable source of electricity.”

“What this means for RACE is we are striving towards having a future nuclear fusion plant with as few people operating it as possible, and ideally with as little remote maintenance as possible. “When we must do inspection and maintenance, it needs to be fast and reliable.

“This is our challenge – it’s called RACE to ZERO. In other words, it means zero manual intervention.”

One example project is the multi-million refurbishment of the Telescopic Articulated Remote Mast (TARM) at RACE. This will be a unique test bed to explore how to control a high precision payload with a hyper-redundant manipulator. Rob explains. “TARM looks massive but it’s actually slender, and so it bends. We need to develop control algorithms to speed up motion to increase productivity and deal with the dynamics. AI offers the potential to predict and react to real time non-linearities ‘better’ than current techniques, and that’s why we are smothering TARM with sensors.”

The work with TARM is relevant to DEMO, ITER and JET. “Regarding JET, we have said for a long time that after the pending deuterium-tritium campaign, or even during it when activation levels restrict human access, we will be reliant on the remote handling system for in-vessel intervention”, Rob maintained. “In refurbishing it, we will need to modify it, so that if it malfunctions we can remotely recover the system and hence guarantee we can close containment. 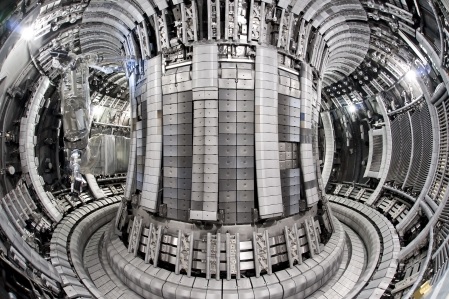 “Work undertaken on TARM so far has seen us strip out 1.5 tonnes of cabling ready to replace it with modern controls and fibre optics. Of course, there will be R&D issues and again AI may play a role as we develop condition monitoring systems to report performance degradation and allow a less conservative through-life strategy. TARM plays an important role as a test bed for the JET remote handling refurbishment program.”

Another critical aspect is the human machine interface. “With robotics now, we often have one person for one robot – or more people in the case of JET” said Rob. “That is an expensive ratio. So we need more autonomy and better ways of using the robotics and human operators efficiently.”

For both Rob and those working in these areas, it’s obvious AI and robotics allow people to be creative, in a similar way that new technologies have done so throughout the centuries.

“I’ve said before, the best remote handling system for a fusion power plant is a non-existent one” he added. “Now obviously that’s not an achievable goal because of the nature of nuclear fusion, but the broader point is I don’t want to end up being proud of a complicated remote handling system – that would be bad news. As engineers we need to keep simplifying.”

This makes sense. So then, what is the solution?

“I think the solution is discerning whether or not a task will achieve a better result if performed by a machine. In fusion we don’t have that luxury – the machines need to work – and so there is an added layer of difficulty.”

In some sectors AI will have a somewhat disruptive impact on the job market. “Autonomous vehicles are an oft-cited example” Rob said. “And our involvement with hosting driverless car testing gives RACE some insights.

“When I step back and look at this, I see autonomous vehicles as a bit like the flat head of a drawing pin. It’s where a huge amount of force is going to be applied with lots of money invested and many big companies playing a part. In this analogy the nuclear sector is a bit like the sharp end of the pin where we need to address some very specific challenges. If we get this right, we can use the pressure from driverless vehicles to help us make progress. This is as much cultural as technical. Decision makers will see this next generation of mobility solutions and ask how they can be applied in adjacent markets.”

Since RACE opened its building in 2016, the workforce has ballooned as more key projects have been won.

“Growing and running at the same time is tough” Rob maintains. But what about the future? The challenges are obvious: Brexit, delivering the Industrial Strategy, as well as developing a viable fusion power plant maintenance 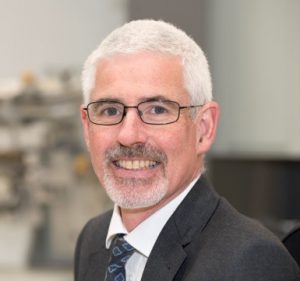 “We constantly need to think about how we improve our industrial relations, but more than that, how do we go about developing strategic partnerships in the UK and around the world?” Rob said.

“Brexit will mean that we need to work harder to build relationships and work with people around the world. Lots of people are going out from the UK and talking to the Americans, the Chinese, and the Japanese about robotics, AI and much more besides.”

What about potential spin-outs?

“Here at UKAEA, we have got huge potential; a bunch of very smart people trying to solve difficult problems. Should different ventures come out of that? Along the route we are no doubt uncovering new knowledge which has application in other areas, but we probably don’t notice because our eyes are fixed on the long-term prize. A measure of a leading innovative organisation is doing something with these ideas; this is a sign of being a successful R&D organisation.”

It seems that what makes RACE thrive is an awareness of the chance to utilise an expert knowledge of the field in order to pursue something of global significance (namely ensuring the success of nuclear fusion commercially). And that is the case whether it is through maintaining and operating the JET remote handling systems, refurbishing TARM, delivering on industry contracts or even hosting autonomous vehicle testing.

“These challenges can test our resolve but end up being the things which shape us individually and as an organisation” said Rob. “It’s extremely exciting to be at the frontline of such leading research and development projects.”